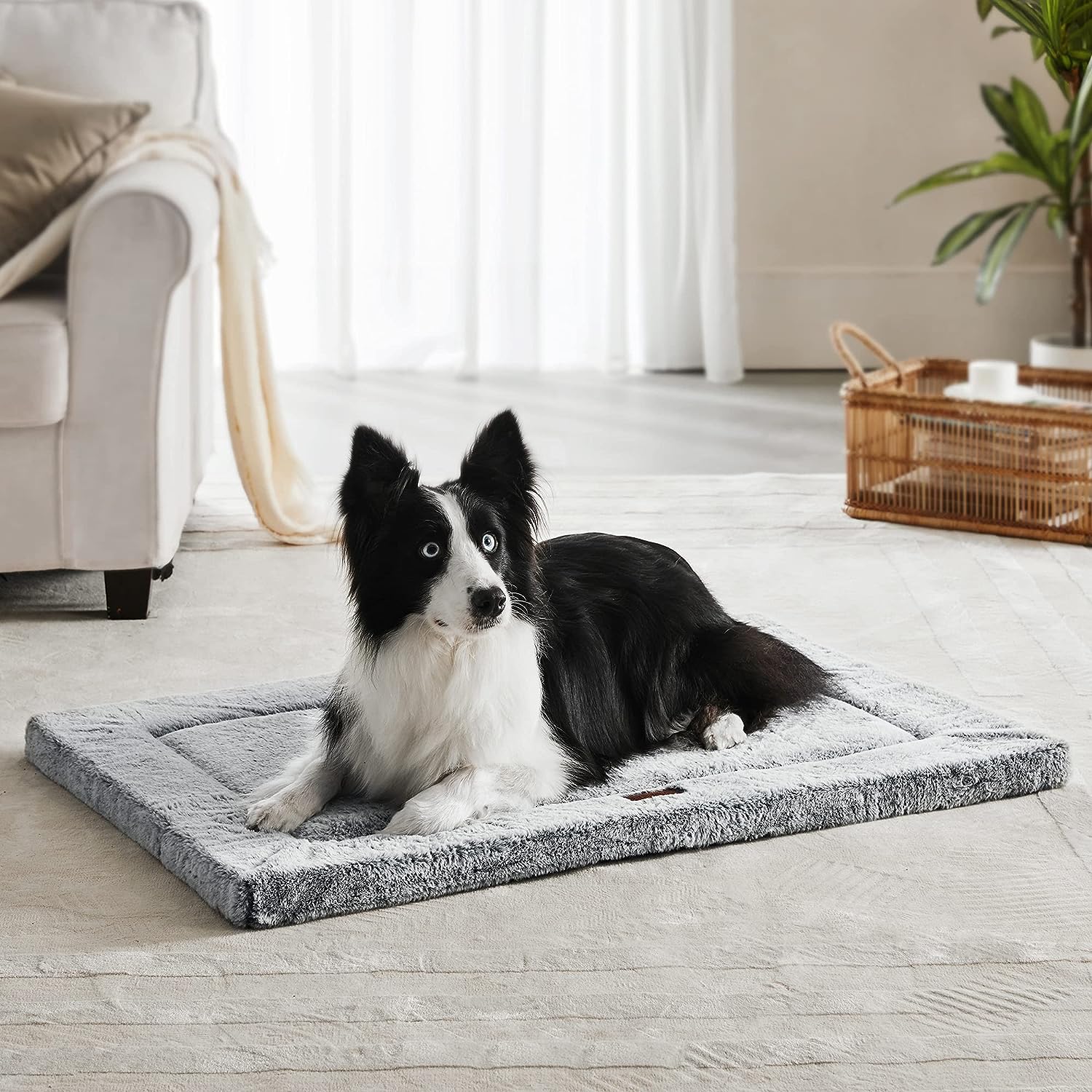 We know how much you love your pets. That's why we are committed to designing innovative and high-quality products to make your pet's life better.

You can use this mat wherever you choose for a variety of purposes , like sofa,pet cages, rear seats In cars,floor etc.This dog crate bed also can be rolled up and taken with you on outdoor travel, and suitable for all seasons.

This dog bed is not chewy. If your dog likes to chew, it is recommended to teach him not to do so, because almost all dog beds are hard to resist their chewing

Skateboard steering is a very challenging thing to model. I’m used to doing some incredibly complex calculations for my bicycle projects but producing this calculator pushed me to my limit. It took me three days of full time work to finally get the math correct. I had done a calculator like this 20 years ago. … Read more

When putting a skateboard together or designing a truck, we need to understand the inherent stability of the system. Control is everything and we can influence that with our choices. Often, we will talk about trail when looking into this. The trail is simply, the length of the lever that is influenced by the ground … Read more

One of the most important characteristics of a skate truck, but almost totally ignored, is the roll center. I was one of the first people to discuss this back in 2000 (20 years ago!) and I’ve seen a few people replicate my explanation but not many. As I’m wrapping up the design of the new … Read more

This made my day and was very nice to see. Owen at Donard Custom Bikes in Northern Ireland posted this image to his Instagram. Three tires contact patch. Each at 70psi. The top three are with a road tire labeled 25mm (26mm actual) loaded 0kg, 35kg and 70kg. The middle three are with a road … Read more

I know a few things. After 51 years on earth I’d have to. Two of things that I know more than almost anyone I know is bicycle design and skateboard design. I’m pretty good with a couple other things. This is about skateboards. Sadly, while I’ve been making some serious progress with producing some important … Read more

This was a nice gift that showed up last week. I was talking with Josh Ogle on the phone last week, I can’t remember what started this, I think that I called him about center lock threading. I was talking to him about some nerdy detail for modeling and engineering threads using equation driven formula … Read more

The last pieces to the TIE Advanced puzzle have come into place. Largely, the use of a much larger front tire. Just as moving the front tire of the klunker to 29×3.0 was completely transformative, it has been on the TIE. Of course, I knew this to be the case. This is how bikes work. … Read more

Construction of the TIE Advanced X1 (Released early July) was turning a bit frantic and wild near the end. Every build that I do seems to have new features and complexities that involve even more new tools and solutions that compound production and suck up much more time than a simple redesign shown on paper. … Read more

Our buddy Ben Land is back with some intel. Ben was working with me to get the Skynet Frame Fixture sorted out and proven. Since, he’s done a few more bikes and his work has improved significantly. Still, like me, Ben actually rides bikes. This means that shit breaks. In this case, he blew up … Read more

Now that the TIE Advanced X1 is out in the wild, it needed a proper test and in a way that I prefer to not, a long long suffer fest where it could be measured for performance. This bike is designed to be pedaled very hard and cover a lot of ground. Philip Norman is … Read more

It’s been 2 1/2 years since the PVD T-47 Airspeeder shifted my understanding of what a narrow gauge bike could do. That bike is still well ahead of what anyone else is doing but I’d found it’s limitations and ways to improve it. During COVID, most of my riding has been on my all-road bike … Read more

“Skynet IS the virus.” – John Connor Just over a month ago, the SKYNET chassis fixture project was announced. An open source bicycle chassis fixture that exceeds in capability over anything that can be purchased. It would be based on the PVD Cyberdyne System fixture but significantly more accessible and affordable. Since then the design … Read more

I have a feeling that there’s going to be some discussion about math on the internets very soon so I’m going to start with something fun and maybe useful for a lot of people in the current era. I was on a ride yesterday where so many of my ideas come from. I was thinking … Read more

Most steel tubing sold by the major brands is truly terrible for modern bicycles. The tubes were largely specified back in the 1970s for hobby builders to replicate road racing bikes. I’ve been asking tube suppliers for years for better tubes to select from. I’ve generally been ignored. Years have gone by like this. Back … Read more

I’ve been so busy over the past year and a half. I’ve done and incredible amount of work on my designs and tooling but still don’t have a finished bike to show for it. New fixtures, new designs, new everything. The new normal is ‘new’. In the background recently are projects that are large in … Read more

Last March, early in the COVID-19 lockdown, I set out to design and build a new frame fixture for myself. This was need-based on many levels. I wanted something amazing. Something better than anything I could buy. A fixture for a new way of doing things. The result was the PVD Cyberdyne System. I still … Dance Class Low Profile Jazz Shoe (Toddler/Little Kid)

I was doing a quick spin on the bike today. The mind clears when you’re trying to ride down narrow singletrack as fast as you can. I was bopping through Hobo Trail and I was thinking about Richard Feynman and his learning technique. Pretend to teach a concept you want to learn about to a … Read more

Bicycle framebuilding is a particular simple craft. Connect a few bits of material together and strap some wheels to it. What makes good framebuilding difficult is everything that happens around the build. One of the harder issues to get up to speed on when making bicycle frames on a small scale is the lack of … Read more

I live in a world divided into small fractions of a millimeter. Often, I spend a great deal of time freeing up just 1/2 of one and feel like a conquering hero. It is my struggle. I was recently sourcing some forks for the all-road bikes that we are about to do. It had been … Read more

A long time ago, in a galaxy far far away…. (FS rocker shot 1/2 second late. Porter Square, Cambridge MA. 1986) A child of the 1970s, I grew up playing on cheap plastic skateboards. In the early eighties, the new boom in skateboarding and my young teenage years were a perfect storm setting me on … Read more

Hang around any mountain bikers that don’t understand bike geometry for very long and you’ll be sure to hear about the magic of mullets. A 29″ (622mm, business) wheel in the front and a 27.5″ (584mm, party) in the back. It’s amazing how this silver bullet has caught the eye of the retail market. The … Read more

Klunkers. Dayum. These things keep teaching me some big lessons in bike design and engineering. I have been forced to look at details in entirely new and unexpected ways to solve this riddle and that learning carries to all facets of bike design. In addition to design challenges and growth in tooling and CAD, there … Read more

Here’s a cool modification to the Cyberdyne frame fixture. While I worked to make the fixture as best I could in the initial round, I wasn’t going to be able to do everything I wanted as the project would never end. Now, when I can focus on just finer aspects of the use and refinement, … Read more

This is an interesting bit. A week ago, PinkBike posted a video and article, Field Test: 10 Trail and Enduro Bikes Hucked To Flat at 1,000 FPS. This is cheap and easy content for them to produce and makes the little boys and girls happy. I don’t know what it really does other than that. … Read more

I’ve been working on my suspension bike design for about five months now. There’s no rush and I’m trying to do it right. I can prototype as much as I like in the computer and it doesn’t cost me a thing. What’s expensive is wasting money or time once I start cutting metal.  I’m nearing … Read more

This is a question that has been on my mind for the last decade, how much stroke do we need in a dropper seatpost? It’s not a new question but a good one to ask now and then. It’s a moving target. As we speculate on what we need, then eventually use that, our position … Read more

I finally lost my wedding band. As a machinist type person, it comes off all of the time for safety. At the end a day last week it wasn’t in my pocket where I put it. Sucks.   It’s a pretty good design. Stainless is the ultimate ring material. Super slim and strong with a … Read more

I’ve been trying to learn to draw in metric for the last few years. It’s not as easy as you’d think, certainly not for an American. I’m now old.  50 years old so I have been thinking in a mix of old ways and new in the United States. I am able to  change my … Read more

Toolmaking has been a theme lately. After putting time into my frame fixture tooling and my press tooling and a lingering mandrel bending project. I’m hoping to get back to some go fast shit soon. I finished the leveling base plates for my Enerpac press a while ago. They have been an awesome improvement to … Read more